Having taken up karate in the late Seventies, I have had a dream to train in Japan at the home of Shotokan Karate:- The Japan Karate Association (JKA) Head Quarters in Tokyo. If I wasn’t training in karate I was reading about it in Fighting Arts International a magazine published by Sensei Terry O’Neil one of the best fighters and Instructors this Country has ever produced. My library grew as I added the texts from Sensei Nakayama, the Head of the JKA at the time this only increased my desire to travel and train.

Alas, life got in the way with career, family and the endless need to provide. None of which I might add I would change. But now having turned the ripe old age of 55, with children grown up and making their own way in the world, I find I have the time to indulge in my dreams.

So last year I started travelling and training with trips to Belgium to train with Sensei Junior Leferve and then later in the year to Ireland to the JKA Ireland event, where, Sensei Dave Farrance and myself had the opportunity to train under Sensei Naka from JKA Head Quarters. Returning home I got to thinking about training in Japan and emailed the JKA to see if this was possible, the reply was swift and positive which only fuelled my excitement even more. 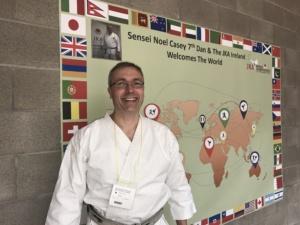 Plans are now taking shape to visit Tokyo on the 9.7.18 with my fellow adventurers: Sensei Dave Farrance; Sensei Jody and my nephew Kevin to train at the home of Shotokan Karate The JKA. Whilst out in Japan, I will endeavour to continue updating this status with the experiences and photos  of this magical and mysterious journey and will do my utmost to bring it to life so that you may share this passion that drives us all to train in karate.